Get a signed copy* of “A Life Unimagined”

Growing up in the 1950s in a segregated neighborhood on Chicago’s southside, UW alumnus Aaron Williams, MBA ’73 was influenced early on to consider possibilities beyond his suburban neighborhood and even the borders of the U.S. However, even the imagination of a young boy could not have dreamed up the path he would travel, ultimately creating connections across cultures and a tremendous impact across international boundaries.

Williams’ distinguished career in public service has seen him assume leadership roles across some of our nation’s critical agencies for furthering global cooperation, development, and peace. He served as a senior official at the U.S. Agency for International Development (USAID), where he reached the rank of career minister in the Senior Foreign Service. Appointed by President Barack Obama, Williams served as director of the U.S. Peace Corps, from 2009–2012. His time with these organizations included historic milestones, becoming the first African-American to serve as USAID’s executive secretary, and the first African-American male to be appointed to lead the Peace Corps. 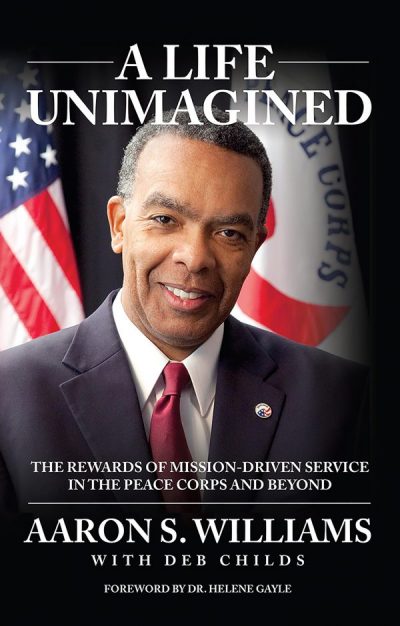 Meet Aaron Williams and hear more about A Life Unimagined at events planned with the following organizations.

No events planned at this time. Keep checking back for updates!

What others are saying about "A Life Unimagined"

In this book, aptly titled, “A Life Unimagined: The Rewards of Mission-Driven Service in the Peace Corps and Beyond” his story began when a young man from a working class family on the South Side of Chicago heard about a “fantastic idea”, the Peace Corps, that had been created by President Kennedy. His first career option was to become a high school teacher, but instead in 1967 Aaron seized this opportunity and served as a Peace Corps Volunteer in the Dominican Republic. The decision transformed his life, and enabled him to help improve the lives of others, and the world, at large. No doubt, that young man would not have become the eighteenth director of the Peace Corps or walked in the shadow of giants like Nelson Mandela and Barack Obama, had he chosen the safe path before him. As US Ambassador to South Africa, I observed Aaron’s innovative leadership as the head of USAID in South Africa, where he played a key role in the creative use of American aid in the development of the new democracy, and he continued to demonstrate this dynamic leadership as a global business executive, and as the director of the U.S. Peace Corps in the Obama administration. His story should serve as an inspiration to young people who intend to follow their dream.

Aaron Williams led the Peace Corps and embodies all its best values—decency, respect for others, and a generous spirit. In A Life Unimagined he makes the case for how we all benefit when countries work together to help those in greatest need. This is certainly a timely message these days when the world can sometimes seem unhinged. Aaron reminds us how their work has engendered good will for America in every region of the world. As my old boss Senator Ted Kennedy said, ‘It’s better to send in the Peace Corps than the Marine Corps.’

The takeaway from A Life Unimagined lies in the possibility of rising to unexpected heights from serving others. I know that story. Though we first met on the other side of the world in South Africa at a time of democratic transformation after the release of Nelson Mandela, Aaron and I both grew up on the South Side of Chicago, where life was not always easy. His journey from there to positions of global leadership weaves through the lives of the people and communities he has served, each step in his journey directed by the grace shown him in response. This book is about the power of faith in what’s possible, of hoping for the best and working for it. Because his life and work has been about lifting others, this book is a balm and a bulwark in selfish times.”

~Deval Patrick, former governor of Massachusetts and author of A Reason to Believe: Lessons from an Improbable Life

I hope that the life and career of Aaron Williams, as portrayed in this book, will inspire future generations of underrepresented groups in our society, both men and women, who seek to make a difference by serving America and the world at large.”

UW-Madison alumnus Aaron Williams, MBA ’73, delivered the keynote lecture for International Education Week 2021. During the event, Williams shared formative experiences from his youth and defining accomplishments throughout his career, providing inspiration for the next generation who seek to lead on the world stage. He  also read excerpts from his memoir, “A Life Unimagined: The Rewards of Mission-Driven Service in the Peace Corps and Beyond.”

Thank you to our cosponsors for making this event a possibility and celebrating International Education Week!