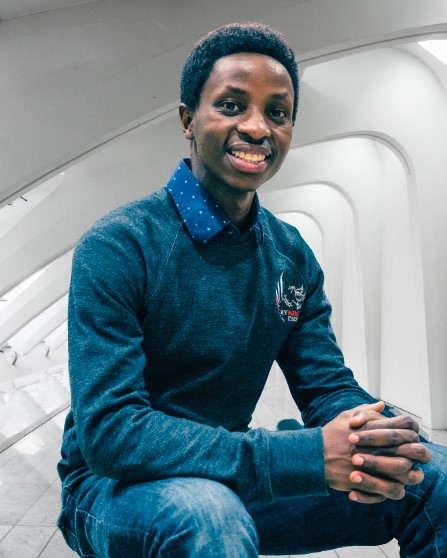 Few understand the importance of blending education and fun more than Joel Baraka. A King-Morgridge Scholar and civil engineering major, Baraka seeks to combine the two and pursue his passion to help make education more accessible for students in refugee camps. With support from a 2021 OZY Genius Award, he will be one step closer to realizing this goal.

The OZY Genius Awards (OGAs), sponsored by Chevrolet, offers 10 college students up to $10,000, along with the time and mentorship to turn their genius ideas into reality. The winners were announced on May 16 at OZY Fest.

Baraka, who hails from Uganda, is the founder and CEO of My HOME Stars, a grassroots edutainment venture focusing on learning tools for both teachers and students in Uganda. He plans to use funds from the OZY Awards to increase production of the 5 STA-Z education game under My HOME Stars at the Kyangwali Refugee Settlement and expand operations to a second refugee camp in Uganda, Kyaka II.

Baraka was born in Congo, but his family fled to Uganda’s Kyangwali Refugee Settlement to escape civil war in his home country. He grew up in the camp, where he completed his primary education before attending high school at the African Leadership Academy in South Africa. At ALA, Baraka explored the possibilities of attending school in the United States and came to UW–Madison through the King-Morgridge Scholars program.

At UW–Madison, Baraka worked with fellow engineering student Anson Liow to develop both My HOME Stars and the 5 STA-Z educational game. The 5 STA-Z incorporates the four core subjects taught across sub-Saharan African into a collaborative and competitive academic board game, which Baraka created after his time working with young students at the refugee camp. The game breaks down academic content into small, easily digestible bits of information, which helps students better engage, Baraka said.

As a rising fifth-year senior, Baraka hopes to not only expand My HOME Stars operations, but further develop his passion for civil engineering and construction management—both of which he says will have a huge impact on his community back home.

He sees the King-Morgridge Scholars program and the UW faculty as key in his development.

“I mean, that’s part of why I really love this university. I’ve had the privilege of having amazing mentors, people who really care about what I care about, and they take me as their child, even though I’m a kid from across the ocean.”