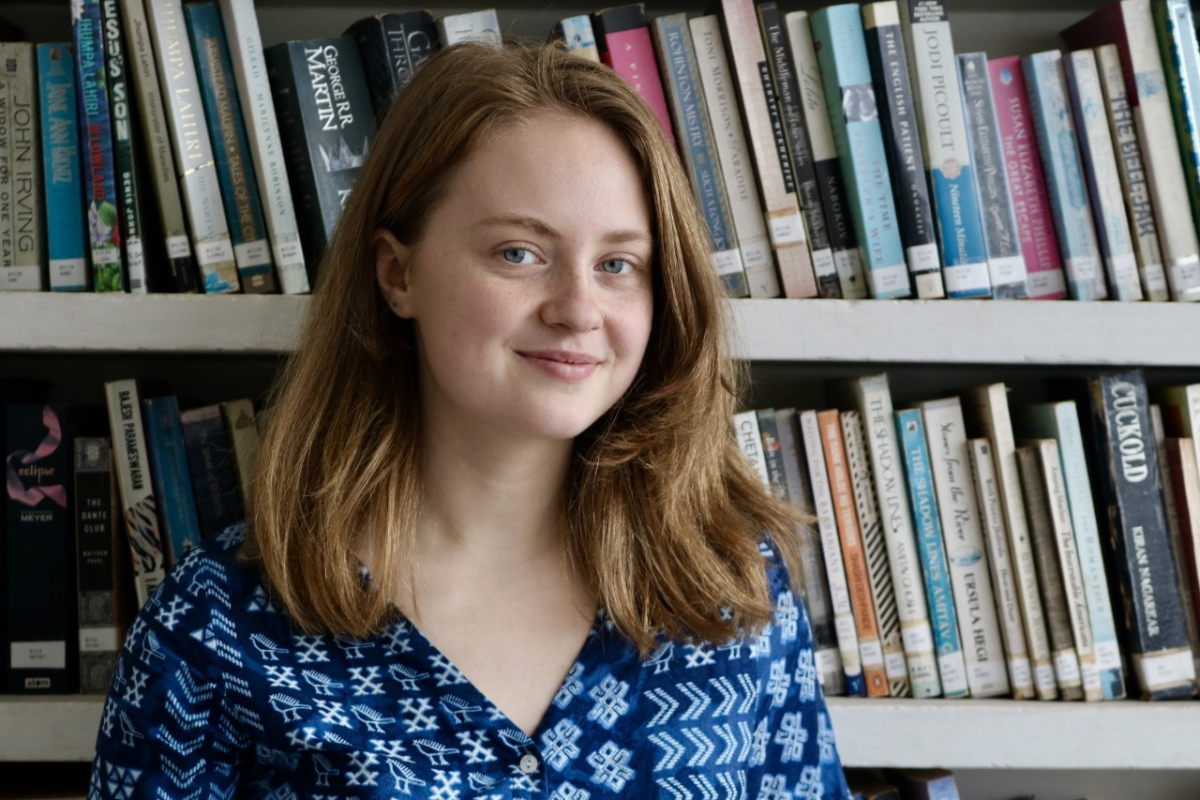 Ella Quainton sat in front of her computer in her childhood home in Princeton, New Jersey, scrolling through images of Madhubani art and reading articles about the style. Madhubani art, native to the Mithila region of Bihar, India, is characterized by two-dimensional imagery of daily domestic life, traditionally painted onto mud walls with bold natural dyes. Quainton studied each image as she searched for a piece to focus on for her final project of the semester.

The painting depicts a woman, repeated in four segments — on the right, the woman’s head is fully cloaked, her body surrounded by children; with each change, the woman becomes less garmented, until finally her hair is loose, her face is visible and only one child stands at her feet.

“[‘Changing Women’] is both breaking norms and trying to convey the way in which women are veiled within their own communities,” Quainton said. “I’m interested in the way women are both bound to the stories and setting in which they grow up, and are sort of confined, but also the ways they find deviance and can challenge the structures in place. The painting moved me so much.”

Shifting her gaze between an image on Jha’s piece on her monitor —and her own contemporary interpretation of the artist’s work, Quainton brushed on new bits of color, each with their own purpose.

As she worked, Quainton recalled the techniques she learned from her mentor while in Varanasi, India, as part of one of UW–Madison’s signature study abroad programs.

Long before she learned to paint in the Madhubani style, Quainton searched for the right study abroad program. She was drawn to cultures with long-standing art histories — histories more robust than ones established in Western countries she had visited — and a place that would extend her knowledge beyond Europe, and France, where she spent the first 11 years of her childhood.

Then, she discovered Madhubani painting.

Quainton, a rising senior in the Creative Writing program who is also pursuing Digital Cinema Production and Religious Studies certificates, recognized aesthetic connections between the graphic style of her own drawings, which she had recently started making and documenting on her Instagram page, and the Madhubani paintings.

“There was something about the style of Madhubani painting that felt really familiar to me,” she said.

Quainton traveled to Varanasi with hopes to truly familiarize herself with Madhubani art — to learn its history and the ritual practice, led by local artist Avinash Karn.

Madhubani practices have been passed down since the seventh century, from generation to generation of women in the Mithila region of India and Nepal. The artworks traditionally depict natural objects and ceremonies, or domestic spaces. Contemporary works delve into modern political content tied to women’s rights conflicts in India – domestic violence, infanticide, and child marriage, among other issues. It is traditional, yet subversive. Throughout history, women of the Mithila region have used the ritual processes of Madhubani to express their existence; today, artists and their works have inspired feminist activism. In this way, the artform is challenging the casteism imposed by a Western gaze.

But, Quainton noted, caste comes back into play when outsiders place meaning on the artform.

“There has been a Western gaze onto Madhubani in the way that foreigners have tried to classify it as a fine art,” she said. “In that process too has been an added layer of elitism.”

Depending on their caste, artists have different access to resources, and thus their work varies within the style. Oppressed caste women traditionally painted on the mud walls of their homes, or on the ground in a courtyard, and used natural materials like vegetable dyes and even cow dung. Since Madhubani has gained traction from high art brokers, women of the upper caste have diverged from traditional practices, and instead made paintings on handmade paper, an artform for which the state and nation now offer awards in excellence.

The Western perspective places emphasis on the work of upper caste women, who have appropriated the ritual practices of those in lower castes, and whose work has been classified as high art.

Quainton said she was hyperaware of her Western understanding of the world as she approached Madhubani art, since the content of the work is heavily steeped in cultural experiences unique to India.

“Learning the techniques with Avinash was an incredible opportunity for me,” she said. “The style will probably subconsciously filter into my future work, but I’ll probably never call my work Madhubani art. Madhubani is so rooted in the stories and rituals and I will never be able to speak to that.”

After six weeks in Varanasi—exploring the city with her classmates, working on her Hindi with her host family, and learning what she could of Madhubani from Karn—Quainton travelled home to Princeton. Like many students around the world, her study abroad experience was cut short due to concerns surrounding COVID-19. She safely evacuated her homestay in India just days before the country implemented an extensive stay-at-home order.

Quainton worked on the pad she brought back from Varanasi, remembering the techniques she learned from her mentor. She used acrylic paints – ones she had previously used in combination with natural marigold and rose petal dyes that Karn helped her concoct. She painted with a new understanding of Madhubani, even after she had left its birthplace.

Quainton completed two paintings in her home: one, an attempted replica of “Changing Women,” the other, a modern-day interpretation of the work, which she titled, “Bearing Women”.

The painting depicts a group of unveiled figures, their eyes prominent and reflected in the patterned border. Quainton said the painting references the significance of the word “bearing” within the context of gender — particularly the act of “bearing witness,” which she said shows solidarity of a community, and allows personal accounts to siphon into broader narratives, like the country has seen happen in the #MeToo movement.

“I wanted to convey the way that stories morph into emblems, are leveraged, mishandled, and ultimately always interpreted through an outward gaze,” she said.

Quainton’s painting emphasizes the importance of community and context to storytelling — particularly stories that originate from marginalized groups, and how historically, those stories have been limited in the media.

Though she left out what she called “the most interesting aspect” of Jha’s painting, the veil, Quainton incorporated the concept more broadly into her contemporary interpretation of the piece.

“Veiling is a big part of art, to me. The artist has to show part of themselves — so you see what they’re challenging or depicting, but in a way that’s slightly obscured.”

In Varanasi, Quainton opened her eyes to the Hindu tales told through public art. She learned to paint among locals, whose families had practiced the Madhubani traditions for centuries. She created a short documentary and a graphic novel. Despite the unique circumstances, Quainton persisted to create.

Since her return to campus for a remote semester, Quainton has been works for the Loka Initiative at the UW-Madison, whose mission is “to support faith-led environmental and climate efforts locally and around the world by helping build capacity of faith leaders and culture keepers of indigenous traditions, and by creating new opportunities for projects, partnerships and public outreach.” She hopes to continue creating art that explores the connection between religion, gender, home, and social justice.

Regardless of where her studies take her next, Quainton’s study abroad experience confirmed one thing: she wants to be part of the art world.

“It’s sometimes hard to convince myself that I should pursue art,” she said. “This experience gave me confidence that this is the best thing I can do with my time on earth. I know this is what I want to do.”