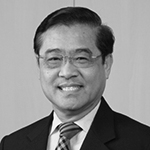 Piyabutr Cholvijarn is President of the Kenan Institute Asia and previous chairman of Pianarong Co Ltd. in Bangkok. He spent 22 years of his professional career with the Union Bank of Bangkok and rose the position of President and CEO. Pityabutr has also served on the Kenan Institute Asia Board of Trustees in 2008 and was elected Vice Chairman in 2011; he also serves on the Executive Committee. He has served as Kenan Institute Asia’s President as well as two terms as a senator and one term as a member of the National Assembly. He advised the Thai Chamber of Commerce, the Thai Board of Trade, the National Defense College, the Young Presidents’ Organization, and College of Management, Mahidol University. Piyabutr earned his Bachelor of Arts in Economics, University of Wisconsin-Madison and Master of Arts in Economics, Money, and Banking from Columbia University. He serves as President of the University of Wisconsin Alumni Association Thailand Chapter, the Columbia University Alumni Association of Thailand and Assumption College Alumni Association.