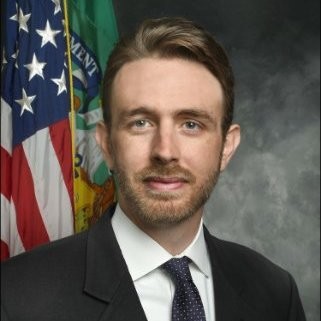 Roger Polack ’06, currently an associate with Covington and Burling LLC, made major contributions to national defense, security, and diplomacy while with the U.S. Department of Treasury from 2007–2017. Polack played key roles countering terrorism and insurgent financing in South and Southeast Asia, leading teams in Afghanistan conducting counter threat finance. He was also instrumental in laying groundwork for the Joint Comprehensive Plan of Action with Iran, and worked with the Committee on Foreign Investment in the U.S. to review mergers and acquisitions for national security threats.

Polack’s interest in international affairs began long before joining the Department of Treasury. He first began seizing opportunities for international learning during his junior year in high school, which he spent in Germany through the Rotary Youth Exchange Program. After graduating high school, Polack enrolled in UW–Eau Claire, where he planned to major in German and journalism. At the end of his freshman year, he transferred to UW–Madison so he could explore broader educational opportunities, including international study.

Once at UW–Madison, Polack looked into study abroad programs and found the College Year in Thailand. Being fully immersed in a new culture along with the opportunity to see the country greatly appealed to Polack, who had never visited the region. The program required language skills in Thai, so prior to departing, Polack participated in the Southeast Asian Studies Summer Institute (SEASSI), an eight-week training program for undergraduates, graduates, and professionals. The institute is administered through the Center for Southeast Asian Studies (CSEAS) at UW–Madison—a Title VI National Resource Center.

“I studied Thai through SEASSI for two months before going to Thailand,” Polack said. “I went abroad being able to hold basic conversations in the language. The program was an opportunity for me to diversify myself in terms of knowledge, language, and all of the cultural experiences that come along with that.”

For Polack, the year in Thailand was transformational. He became interested in Burma, which at that time was under an oppressive military regime. When he returned, he changed his major to Southeast Asian studies, international studies, and political science. Within his research, he worked to incorporate his interest in Burma whenever he had the opportunity, eventually enrolling in SEASSI again to study the language and gain a greater cultural understanding of the country.

Over the following years, Polack worked one-on-one with several professors in CSEAS, exploring topics on the culture, political landscape, history, and economy of Southeast Asia. Polack’s final semester was spent in Thailand and Burma through a National Security Education Program (NSEP) grant, which allowed him to research and report on drug trafficking and ethnic armed groups in Burma.

“To be able to have intimacy with a country before you experience it at a professional level is incredibly important,” Polack said. “The ability of UW–Madison to facilitate that in places critical to national security is phenomenal. Resources SEASSI has to bring a student up to speed quickly and efficiently on a language is unparalleled. After two months of intensive study you can hold basic conversations, which gets you on the ground. You can build from that.”

Following graduation from UW–Madison, Polack was hired as a contractor for ConStrat, where he analyzed Southeast Asian media and focused on perceptions of the U.S. and security issues in the region. The role also fulfilled a requirement of his NSEP funding, which required Polack to hold a position supporting the federal government for a year, ideally in a national security environment.

One year after he began working for ConStrat, Polack received an email from Mike Cullinane, associate director for the Center for Southeast Asian Studies at UW–Madison, letting him know that the U.S. Department of the Treasury was seeking a Southeast Asia specialist. Polack applied and was selected for the position, aided by special hiring authorities NSEP recipients benefit from. He began working full-time with the Treasury Department in August 2007 as an analyst with the Office of Intelligence and Analysis. The position was crucial in targeting and eliminating funding for terrorism sources from around the world.

“After 9-11, there was a lot of scrutiny on how al-Qaida terrorists were able to move money across the world to train and conduct attacks,” Polack said. “The Treasury Department was tasked to set up an intelligence unit to track funding going to terrorist organizations around the world. I was hired to focus on Southeast Asia and track funds between the Gulf and various organizations in the region.”

He would also uncover how funds were raised within Southeast Asia by terrorist groups, identify donors, and facilitate the freezing of assets used by terrorist organizations. Additionally, he worked with partner countries, sharing intelligence for more efficient, coordinated efforts.

Polack’s research on drug trafficking in Southeast Asia proved to be a major asset to his career. Beginning in 2009, he took part in the coordinated effort to try and stabilize Afghanistan. Polack began looking into the money the Taliban was making from the opium trade. He examined the entire chain of the production process, from growing the opium to heroin processing and eventual trafficking.

“Focusing on drug activity in Afghanistan was a shift in region, but it allowed me to leverage what I learned at UW–Madison to eventually become a subject matter expert,” Polack said.

As a member of the unit established by the U.S. Drug Enforcement Administration, Department of Defense, and Department of the Treasury, Polack helped weaken the insurgency in Afghanistan and also examine corruption in the Afghan government and banking sector.

During this time, Polack deployed to Afghanistan for four months as an analyst with the Afghanistan Threat Finance (ATFC), a National Security Council established unit led by the U.S. Drug Enforcement Agency, the Department of Defense, and the Department of the Treasury.  During his tour, he debriefed detainees to learn how money was flowing through the insurgency and narcotics trade. Using this information and other intelligence, he partnered with a colleagues from the Department of Defense and the U.S. Navy to produce a groundbreaking study on insurgent income from narcotics trade. Polack was also tasked with briefing high-level officials such as U.S. generals, the ambassador to Afghanistan, and members of the Afghanistan Security Council on finding from the study and where efforts could be focused to have the greatest impact.

Even after returning from Afghanistan, Polack continued examining the narcotics trade. His success in this work led to him being selected as the deputy director of the ATFC. He returned to Afghanistan for 15 months during which time he helped planned joint military law enforcement operations, trained new analysts, mobilized the Afghan financial intelligence unit, and partnered with the U.S. intelligence community to share information. He was 28 years old.

“It is some of the best work I’ve had the opportunity to do,” Polack said.

In 2013, Polack returned to Washington D.C. and switched his focus from Afghanistan and countering terrorism finance to analyzing East Asian economics and ultimately working for the Office of Investment Security and the Committee on Foreign Investment in the United States. He reviewed mergers and acquisitions for possible national security concerns. He was presented with yet another challenge in 2015—assisting on the Joint Comprehensive Plan of Action (JCPOA), more commonly known as the Iran nuclear deal. Polack worked on implementing the plan, negotiating with Iranian counterparts, writing regulations, and briefing key figures in South America and Europe on the new trade potential as a result of the JCPOA.

Despite his intense schedule working on major projects with the Department of the Treasury and other U.S. agencies focused on security and defense, Polack began studying law at night upon his return from Afghanistan and earned his J.D. from Georgetown University Law Center in 2017. He has since taken a position as an associate with Covington and Burling LLP.

“I became interested in law while working in Afghanistan,” Polack said. “The role of the legal system and the ability of a country to function and have security really struck me during my time in Southeast Asia. Those experiences were major drivers for making the decision to become involved in law.”

Polack said he continues to benefit from the relationships and experiences he forged during his decade working with the Department of the Treasury, noting how his roles continually built off one another and provided him with new challenges and more opportunities for personal and professional growth.

He offered advice to current students considering a career on the global stage.

“Dive in and take advantage of everything UW–Madison has to offer,” Polack said. “Focus on language and build off of that. Your ability to function overseas with language, culture, and history in hand will be greatly expanded.”