The University of Wisconsin–Madison’s King-Morgridge Scholars could one day lead the charge in alleviating poverty and other international issues around the globe.

With roots in the Democratic Republic of the Congo, Ethiopia, Ghana, Kenya, Malawi, Rwanda, Tibet, Uganda and Zimbabwe, scholars transition from their home country to UW–Madison, where they work to develop the knowledge and skills that will serve as the base for their future careers and goals.

In a podcast series released from King Philanthropies, the King–Morgidge Scholars share their experiences in their home countries, what it has been like to live and learn in Wisconsin, and their aspirations for the future. Season one’s theme focuses on community and its power to transform and positively impact lives.

Three scholars from UW–Madison are interviewed by Bev Watson of King Philanthropies in the season one podcasts. A second season, featuring more interviews, will be released later this spring. 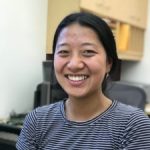 Tenzin, a Tibetan living in India, shares her passion to make safe spaces for exchange of ideas and exploration, even as she passionately advocates for her own culture. She also delves into her vision to use education as a solution to global poverty.

Jeff shares his inspiring story to capture the world around him through art; giving voice to others and inspiring people to action. We will hear about Jeff’s vision to help empower his fellow Kenyans using an “exponential effect.”

Inspired by her mother’s love and sacrifice, Tracy shares the roots of her desire to empower women in rural and impoverished communities in Kenya. Embracing a cross-sector approach, she shares her vision for broadening opportunities for women to excel.

Stream or download the podcast episodes at the links above, or see all podcasts in the King Global Scholars on Air series at kingphilanthropies.org/king-global-scholars-on-air-the-podcast. Podcasts are also available on iTunes, Stitcher and Soundcloud.  Watch for season 2 of the series later this spring, which will feature three more scholars from UW–Madison.

The King-Morgridge Scholars Program, which was made possible through the generosity of the King and Morgridge families, endows six scholarships each year to enterprising, creative young adults committed to poverty alleviation. Participants are selected from countries in Africa, Latin America, South and Southeast Asia, and the Caribbean.