For the third year in a row, University of Wisconsin–Madison has been ranked No. 1 among large schools on Peace Corps’ list of top volunteer-producing colleges and universities in 2019. There are 75 Badgers currently volunteering in countries around the world. 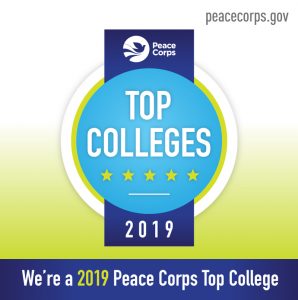 UW–Madison has consistently ranked in the Top 5 since 2012. The university is #2 for total volunteers since 1961, with nearly 3,300 alumni having served. More than 6,400 Wisconsinites have served as Peace Corps volunteers since the agency’s founding.

During a visit to campus last fall, Peace Corps Director Jody Olsen lauded UW–Madison for its work in preparing students to become global citizens. She emphasized that this mindset prepares students for service and allows them to build valuable skills while volunteering.

“We have seen time and again that the colleges and universities that produce the most Peace Corps volunteers focus on cultivating global citizens in addition to promoting scholarship,” said Olsen. “I am proud that so many graduates of these esteemed institutions leverage their educations to make the world a better place. They bring critical skills to communities around the world and gain hands-on, life-changing experience along the way.”

“There is a strong spirit of service inherent to Badgers and Wisconsinites,” said Guido Podestá, vice provost and dean of UW–Madison’s International Division. “Utilizing their skills and knowledge to benefit individuals and communities around the world creates bonds that transcend culture and geography. Volunteering is also an opportunity to learn about other nations and peoples, which is a major benefit for all.”

Marissa Glazos, a 2014 graduate who majored in psychology and biology, was drawn to volunteer in the Peace Corps through its prominence at the university and in the community. She is currently a secondary education volunteer in Mongolia.

“The University of Wisconsin–Madison was a ‘top Peace Corps’ university when I was a student,” said Glazos. “The Madison area also has a very large [Returned Peace Corps Volunteer] community…therefore, it was hard not to think about Peace Corps and all the opportunities associated with it.”

The skills and experiences Peace Corps volunteers gain during their service allow them to thrive in a variety of career fields across numerous sectors, such as government, nonprofit, corporate entities. Learn more about the Peace Corps at UW–Madison at peacecorps.wisc.edu.

About the Peace Corps
The Peace Corps sends Americans with a passion for service abroad on behalf of the United States to work with communities and create lasting change. Volunteers develop sustainable solutions to address challenges in education, health, community economic development, agriculture, the environment and youth development. Through their Peace Corps experience, volunteers gain a unique cultural understanding and a life-long commitment to service that positions them to succeed in today’s global economy. Since President John F. Kennedy established the Peace Corps in 1961, more than 235,000 Americans of all ages have served in 141 countries worldwide. For more information, visit peacecorps.gov and follow on Facebook, Instagram and Twitter.