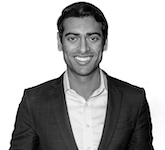 Steven Olikara is the Founder of Millennial Action Project (MAP), the largest nonpartisan organization of young lawmakers in the U.S. MAP works with over 1,500 elected leaders in Congress and state legislatures to strengthen our democracy. A nationally-recognized political commentator, Steven has appeared on CNN, MSNBC, Fox News, and many other news outlets. An avid musician, he is also co-author of the book, JFK: THE LAST SPEECH, on the role of artists in democracy. Steven hosts the Meeting in Middle America podcast and is the subject of the new documentary, The Reunited States. Previously, Steven has advised two multi-platinum recording artists on global youth empowerment and sustainable energy, including an initiative that electrified over one million homes with solar power across Africa. He also spearheaded a safe water access project for rural schools in Tanzania with USAID and was a founding Board member of the AMEL Project, which trains young human rights activists from the Middle East and Africa.

Steven graduated Phi Beta Kappa from the University of Wisconsin-Madison as a Udall and Truman Scholar. He serves on numerous Boards and Commissions advancing democracy, national service, and the performing arts, including his hometown’s Sharon Lynne Wilson Center for the Arts in Brookfield, WI. In 2012, the Wisconsin Legislature recognized Steven with the State Assembly Citation for outstanding contributions to his home state. Steven has been named a Global Shaper by the World Economic Forum, a Forbes 30 Under 30 in Law & Policy,and a Forward Under 40 by the Wisconsin Alumni Association.