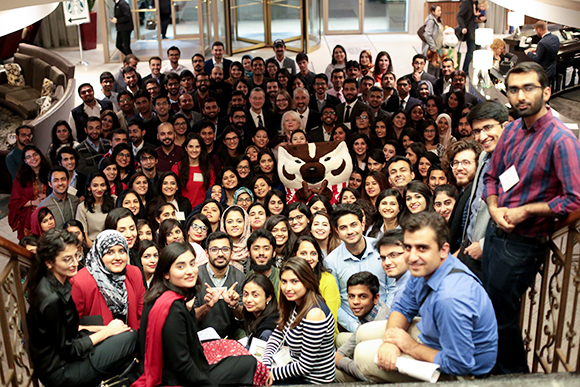 A group of 160 Fulbright Scholars from Pakistan may be pursuing their studies at universities across the U.S., but they will have one location in common—Madison, Wisconsin. For the second year in a row, UW–Madison hosted a 3-day orientation seminar for Pakistani Fulbright Scholars.

The Fulbright Pakistan Orientation Seminar, organized in collaboration with the Institute of International Education’s (IIE) brought together Pakistani master’s and Ph.D. students, currently studying in the U.S., as part of a two-year program supported by the U.S. Department of State.

Much of this year’s orientation seminar, held November 2–4, revolved around social movements, with topics ranging from disability rights and marriage equality to civil rights and political movements. The sessions are designed to offer new perspectives on social issues and discuss how the U.S. has navigated, and continues to navigate, such matters.

“There is a strong legacy of social justice activism in South Asia, so this type of activism is not new to these students,” said Lalita du Perron, associate director of the Center for South Asia and director and organizer of the seminar. “However, the way social movements play out in the United States is often unique. We hope that the Fulbright Scholars will carry these perspectives with them as they continue their studies.”

The students attending this year’s orientation seminar were also able to benefit from peer mentors—Fulbright Scholars from Pakistan who attended the seminar last year in UW–Madison. The mentors, who are one year into their programs, shared their perspectives on everything from academic issues such as avoiding plagiarism, taking tests, and experiencing culture shock.

The attendees also were able to learn more about Wisconsin through activities such as a visit to the capitol and a guided tour of campus focused on the region’s rich Native American history and culture.

“UW–Madison has a long history with South Asia,” said du Perron. “We just finished the 47th Annual Conference on South Asia. We have a flagship study abroad program in India. We host a summer language institute each year for 14 years. Hosting such an accomplished group of scholars is an honor and something we are well-equipped to do.”

The Fulbrighters were not the only distinguished guests attending the Fulbright Pakistan Orientation Seminar. Daniel Rosenblum, deputy assistant secretary for regional affairs and public diplomacy, Bureau of South and Central Asian Affairs within the U.S. Department of State, attended to meet the scholars in person and learn about their expectations for pursuing their scholarship in the U.S.

Rosenblum noted that the Fulbright program is highly valued. The U.S. has hosted more than 5,000 Fulbrighters from Pakistan over the past decades, making it the largest program of any country in the world.

“I hope that the Fulbright Scholars will walk away from this experience with a sense of the incredible strength of American higher education,” Rosenblum said. “In addition, we hope they will gain an appreciation for American culture and the American people and build the personal ties you can only gain by living in another country. That has incredible lasting value. When they go back home and pursue their careers, we want them to not only retain positive feelings about the U.S., but also understand what the U.S. is about in the world. That’s important to avoiding misunderstandings and conflicts.”

Having built a career in international politics and with his own educational background in policy and global issues, Rosenblum is a strong advocate for international education and building a global mindset.

“Experiencing other nations and cultures has the incredible affect to broaden people’s perspectives on life,” Rosenblum said. “We see our own lives differently when we are able to see ourselves from the perspectives of those from other countries, and it helps build our own perspective.”

The sentiment on the power of education was echoed by Faisal Niaz Tirmizi, consul general of Pakistan, who also met with the Fulbright Scholars.

During his remarks at a dinner opening the seminar, the consul general called student exchange “one of the pillars of people to people contacts between any two countries” and emphasized the need for more student exchanges between educational institutions of Pakistan and United States. He also offered words of encouragement, urging Pakistani students to work hard, actively participate in social activities, and eventually bring their expertise back to Pakistan and open centers of excellence in the country.