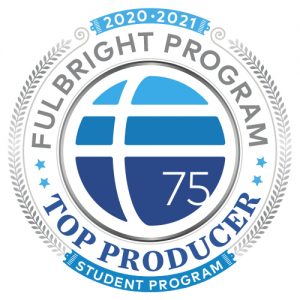 The University of Wisconsin–Madison is proud to be included on the list of U.S. colleges and universities that produced the most 2020–2021 Fulbright U.S. Students. Each year the U.S. Department of State’s Bureau of Educational and Cultural Affairs (ECA) announces the top producing institutions for the Fulbright Program, the U.S. government’s flagship international educational exchange program. The Chronicle of Higher Education publishes the lists annually.

Thirteen students from UW–Madison were awarded this prestigious honor for academic year 2020–2021. Seven students were selected for English teaching assistant (ETA) awards, and six for study and research awards. Students, as well as their award type and country of focus include:

Tyler Lehrer, a PhD student in the History Department, is a historian of religion in the early modern Indian Ocean. He tentatively plans to travel to Sri Lanka later this summer to resume dissertation research at the University of Kelaniya. There, Lehrer will gather textual and archival evidence of the Buddhist monks and ministers who sailed across the Bay of Bengal between the island and mainland Southeast Asia on Dutch East India Company ships in the 1750s as both political ambassadors and valued agents of religious connection.

“In what has already been an extraordinarily challenging year for so many students and researchers, receiving this prestigious award is not only a tremendous honor, but also an opportunity to reconnect on the ground with collaborators, mentors, and dear friends, as well as to resume research in one of the most extraordinarily beautiful and beguilingly complex places in the world,” said Lehrer. “Sri Lanka’s centrality to a vibrant and important maritime geopolitical and cultural region will only continue to grow over the next century.”

“We are proud to see so many UW–Madison students selected for this honor,” said Guido Podestá, vice provost and dean of UW–Madison’s International Division. “These students will not only be pursuing their passions for teaching and research; they will also be playing an important role in promoting international goodwill. I have no doubt these individuals will continue on to become leaders in their fields, and I hope seeing peers recognized will attract even more Badgers to explore these wonderful programs.”

The Fulbright competition is administered at UW–Madison through Fulbright Program Advisor, Mark Lilleleht. The application for the 2022-2023 award cycle will open on March 31, 2021. UW–Madison students interested in learning more about applying can attend an information session led by Fulbright scheduled for March 10, 2021. More information on the upcoming application cycle and other materials are also available.

About the Fulbright Program

The Fulbright Program was created to increase mutual understanding between the people of the United States and the people of other countries. Fulbright is the world’s largest and most diverse international educational exchange program. The primary source of funding for the Fulbright Program is an annual appropriation made by the U.S. Congress to the U.S. Department of State’s Bureau of Educational and Cultural Affairs.

2021 marks the 75th Anniversary of the Fulbright Program. Celebrations throughout the year will highlight the impressive accomplishments and legacy of the program and its alumni over its first 75 years, both in the United States and around the world. A dedicated 75th anniversary website (www.fulbright75.org) will be updated throughout 2021 to showcase Fulbright alumni, partner countries, and anniversary events.

Since its inception in 1946, over 400,000 people from all backgrounds—recent university graduates, teachers, scientists and researchers, artists, and more—have participated in the Fulbright Program and returned with an expanded worldview, a deep appreciation for their host country and its people, and a new network of colleagues and friends. Fulbright alumni have become heads of state, judges, ambassadors, cabinet ministers, CEOs, and university presidents, as well as leading journalists, artists, scientists, and teachers. They include 60 Nobel Laureates, 88 Pulitzer Prize winners, 75 MacArthur Fellows, and thousands of leaders across the private, public and non-profit sectors.