Navi Pillay is a seasoned fighter in the struggle for human rights. From being the first woman to start a law practice in her home province in South Africa to her role as UN High Commissioner for Human Rights, she has spent over 50 years exposing pressing human rights issues concerning rape, torture, the death penalty, and hate speech. 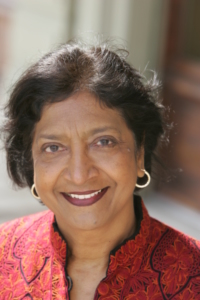 The event is sponsored by the Human Rights Program, International Division, and Global Legal Studies Center. The event is free and open to the public, but registration is requested for planning purposes.

Pillay, a South African national, has held prominent roles on the world stage.

She was the first woman to start a law practice in her home province of Natal in 1967. Over the next few years, she acted as a defense attorney for anti-apartheid activists, exposing torture, and helping establish key rights for prisoners on Robben Island.

Pillay was nominated by the United Nations General Assembly to be a judge on the International Criminal Tribunal for Rwanda in 1995, where she served a total of eight years, the last four as president. In 2008, she played a critical role in the ICTR’s groundbreaking jurisprudence on rape as genocide, as well as on issues of freedom of speech and hate propaganda launching her further into the world’s eye. She was elected in 2003 as a judge on the International Criminal Court in The Hague, where she remained until August 2008.

In July 2008, she was approved by the UN General Assembly as UN High Commissioner for Human Rights and assumed her functions on September 1. On May 24, 2012, the United Nations General Assembly extended her mandate for a further two years.

She served as the UN High Commissioner for Human Rights until August 2014, and continues to work hard to ensure a better world for all as a member of International Nuremberg Principles Academy Advisory Council, International Association Against the Death Penalty, International Services for Human Rights, UN Interim Independent Assessment Panel and as the co-sponsor for Donor Direct USA.

In South Africa, before her nomination to the International Criminal Tribunal for Rwanda, she was a member of the Women’s National Coalition, she contributed to the inclusion of an equality clause in the country’s Constitution that prohibits discrimination on grounds of race, religion and sexual orientation. She co-founded Equality Now, an international women’s rights organization, and has been involved with other organizations working on issues relating to children, detainees, victims of torture and of domestic violence, and a range of economic, social and cultural rights.

The Mildred Fish-Harnack Human Rights and Democracy Lecture is named after a Milwaukee native who was a UW–Madison student in the 1920s. While living in Germany, Fish-Harnack assisted in the escape of German Jews and political dissidents. She is the only American civilian executed under the personal instruction of Adolf Hitler, for her resistance to the Nazi regime. This lectureship is designed to promote greater understanding of human rights and democracy, and enrich international studies at UW–Madison. The lecture brings to campus a person who contributes to the cause of human rights through academic scholarship and/or active leadership.