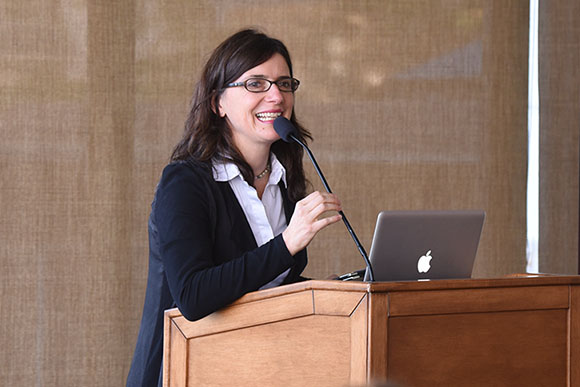 Although international law affects individuals across the globe, women are largely underrepresented in the roles responsible for legal policies and decisions. Viviana Krsticevic, executive director of the Center for Justice and International Law in Washington, D.C., discussed the significant lack of gender parity in international and regional tribunals in her lecture, “Judging and Gender in the International Realm,” at the 2016 Mildred Fish-Harnack Lecture.

Some of these decisions include matters that affect geographic and political boundaries and establishing precedents for gender-related crimes.

“There are many discussions to be had and many ways to move forward that are not necessarily happening in the legal world,” Krsticevic said. “Equality and the participation of women in all levels of decision making are critical for global development and peace processes.”

Krsticevic shared statistics from several international governing bodies to illustrate the lack of gender parity in legal bodies. According to Krsticevic, the International Court of Justice has had only four women judges out of over 100 judges since being established in 1945. Similarly, the Inter-American Court of Human Rights has only one woman judge out of seven. Only two of the eleven judges on the African Court on Human and Peoples’ Rights are held by women.

“People are struck by how dismal the numbers are in terms of the number of women representatives across the board,” said Alexandra Huneeus, chair of the Human Rights Program. “One of virtues of the Fish-Harnack lecture is it inspires students to think beyond their current and local lives and to dream big and imagine themselves doing important things in the world.”

The Mildred Fish-Harnack Human Rights and Democracy Lecture is named after a Milwaukee native who was a UW–Madison student in the 1920s. While living in Germany, Fish-Harnack assisted in the escape of German Jews and political dissidents. She is the only American civilian executed under the personal instruction of Adolf Hitler, for her resistance to the Nazi regime. This lectureship is designed to promote greater understanding of human rights and democracy, and enrich international studies at UW-Madison. The lecture brings to campus a person who contributes to the cause of human rights through academic scholarship and/or active leadership.

For additional information on this story or the International Division, contact Steven Barcus at (608) 262-5590 or sbarcus@wisc.edu.