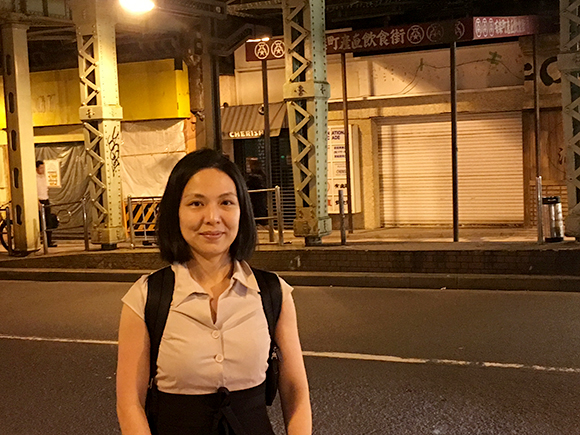 Shihoko Fujiwara ’03 is leading a crusade to wipe out human trafficking in Japan.

Part of the struggle is helping people understand what human trafficking is and the scope of the problem in Japan.

Japan’s National Police Agency (NPA) counted 42 victims of human trafficking in Japan in 2017. The number, which includes 28 Japanese citizens and 14 trafficked from other countries, represents victims forced into labor, prostitution, pornography, and other acts. However, the problem could be far more extensive. Lighthouse reported assisting 138 victims, more than three times the number reported by the NPA for that year.

The significant discrepancy in the victim count is a result of human trafficking not being criminalized in all forms and a legal system and culture that leaves many victims reluctant to come forward.

“Many are surprised to hear that human trafficking, particularly sex trafficking, is a problem in Japan,” Fujiwara said. “It is not just prostitution. This is modern day slavery and commercialized sex, where debt, violence, threats, lies, and other forms of coercion are used to manipulate individuals to engage in acts against their will.”

An all-too-common scenario sees young women recruited under the guise of becoming models or actresses, only to be forced into signing contracts that that are difficult to break. The victims often end up having pictures taken of them in provocative poses or having to participate in pornographic videos. Feeling trapped by a “lawful” contract, victims often don’t come forward feeling shame and fearing retaliation.

A beacon of hope

Fujiwara founded Lighthouse in 2004 after completing a yearlong fellowship at Polaris, a Washington, D.C. based NGO that also seeks to eradicate human trafficking worldwide. While Lighthouse was initially a branch of Polaris, it has since become an independent organization focusing on outreach and advocacy in Japan.

“Even though Lighthouse is now a separate organization from Polaris, it was very good that we were a part of that organization for our first five years,” Fujiwara said. “I saw Polaris helping victims directly and changing the legislation in national and local government. I wanted to try and do the same here.”

Fujiwara and her staff, which has grown to include six employees, provide confidential consulting through a multilingual hotline, email account, and smartphone app. They also work directly with victims, helping to arrange legal counsel, shelter, and medical care.

The organization creates and distributes materials to raise awareness and understanding of human trafficking. Lighthouse was able to raise a great deal of awareness by publishing a manga, Blue Heart, which tells real stories of victims of human and sex trafficking.

“We want to be the light of hope for victims who have been cajoled and trapped in a situation,” Fujiwara said. “For last ten years, Lighthouse has been primarily focused on rescuing. Now we are also doing a lot of lobbying to gain more national recognition for this problem.”

Fujiwara hopes to establish a comprehensive anti-trafficking law in Japan by 2020, but finding a major political party to take up the charge has been challenging. There is an overall reluctance to discuss issues related to sex and thereby regulate industries that fuel trafficking.

The U.S. Department of State ranked Japan as Tier 2 in its 2017 Trafficking in Persons Report, noting the nation “does not fully meet the minimum standards for the elimination of trafficking; however, it is making significant efforts to do so.” While the report acknowledged progress being made in preventing trafficking and protecting victims, it also noted that Japan does not meet minimum international standards in fully criminalizing human trafficking in all forms and assigning appropriate penalties and support.

Indifference from top-level politicians has been disheartening, yet Lighthouse has received cooperation from public safety agencies to identify and educate vulnerable populations, and provide resources to escape from the situation. Lighthouse also continues to provide educational materials and training for government and law enforcement officials.

Complicating the work of increasing outreach, raising awareness, and advocating for legislative change is that raising funds to support the work continues to be a drain on the time of Fujiwara and her staff. Currently, funds come from foundations and individual donations.

“Our work is 100 percent funded by individual donors and private grants,” Fujiwara said. “My work as president is to raise enough funds to keep all of the programming running. It has been so challenging since Japan does not have as much of a charitable culture as the U.S. Wondering how we will continue our work into the next year is a constant worry.”

Fujiwara said that support from non-Japanese entities, such as foreign law firms and American Chamber of Commerce, have enabled Lighthouse to continue its mission over the last 14 years. Yet, with most grants lasting for a single year and individual gifts coming sporadically, Fujiwara is looking support for the organization in the short-term and long-term.

Fujiwara first learned about UW–Madison from an alumnus while interning in Tokyo. Shortly after, she transferred from the University of Pittsburgh.

“I saw a photo of campus and just fell in love with it,” said Fujiwara, who majored in international studies. “It has become my second home.”

While at the university, Fujiwara found a mentor in Rick Brooks, an instructor specializing in youth and community development at the UW–Madison Division of Continuing Studies (DCS). Interning for Brooks grew Fujiwara’s passion for public service and health promotion. While working with DCS, she also helped organize a study abroad trip to Sri Lanka, where she and other Badgers engaged in community service.

Fujiwara’s efforts have earned recognition by media and other organizations. In 2008, Fujiwara received a Distinguished Alumni Award from the Wisconsin Alumni Association. In 2012, Aera Magazine named her as one of the “100 People Remaking Japan.” She was also a runner-up for the inaugural Champions of Change Japan award.

Learn more about Lighthouse and how you can support their efforts to eliminate human trafficking.

Shihoko Fujiwara will return to UW-Madison in fall 2018 as a special guest speaker for Global Hot Spots. Learn more about the series.