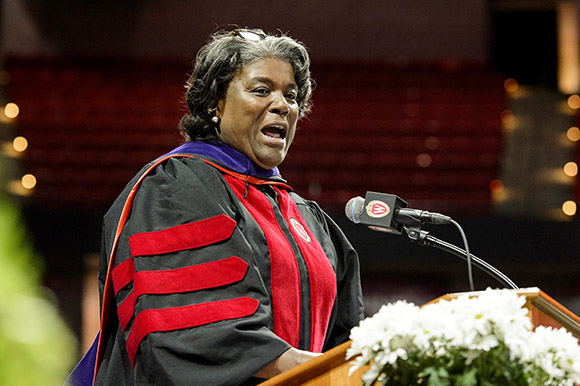 A journey that Ambassador Linda Thomas-Greenfield began over 40 years ago when she started work on her PhD at UW–Madison concluded when Chancellor Rebecca Blank awarded her an honorary degree during the spring 2018 Commencement Ceremony.

The honorary Doctor of Law degree recognizes the profound impact Thomas-Greenfield has had in shaping U.S. foreign policy in Africa and the leadership displayed while intervening in humanitarian crises worldwide. Thomas-Greenfield earned a master’s degree in public administration in 1975 from UW–Madison, where she also completed work toward a doctorate.

Thomas-Greenfield has been heralded as one of the most dynamic and effective diplomats of her time and one of the most respected leaders at the State Department. Her career in the U.S. Foreign Service spanned 35 years, most recently as assistant secretary for African affairs in the Obama administration.

“Linda Thomas-Greenfield is highly respected on the international stage and has repeatedly excelled in leadership roles,” said Guido Podestá, vice provost and dean of the International Division at UW–Madison. “Her work has been inspirational for generations of future leaders in the U.S. and abroad.”

Thomas-Greenfield was nominated jointly by the African Studies Program within the International Division and the Department of Political Science.

During her remarks during the spring 2018 commencement ceremony, Thomas-Greenfield shared her appreciation for the mentorship and support she received from Professor Emeritus of Political Science M. Crawford Young. She also lauded the influence UW–Madison has had on her career as a scholar and diplomat.

“I know what I have achieved in my life is a result of the extraordinary education I received at this great university and the connections I have made here,” Thomas-Greenfield said. “All the major milestones in my life would start here on this campus.”

Thomas-Greenfield played an important role in humanitarian and refugee affairs, earning praise for her work in Pakistan, Kenya, and Geneva. She served as director general of the Foreign Service, a position that also includes the title of director of human resources. She led a team of approximately 400 employees who handled the full range of personnel functions for the State Department’s workforce of 70,000 employees. Thomas-Greenfield was ambassador to Liberia from 2008 to 2012, a critical period of reconstruction in the country after nearly 15 years of conflict.

Throughout her career, Thomas-Greenfield has continued to be a resource and presence on campus, returning to speak with students about opportunities available in the U.S. Foreign Service and meeting with new alumni in D.C. to help them launch their own careers. Her role as a mentor has also extended to young leaders visiting campus from Africa through the Young African Leaders Initiative. Thomas-Greenfield visited campus during summer 2017 to meet with participants and plans to meet with the 2018 cohort as well.

“This university has been on the forefront of African Studies in Africa and continues to this day to have a major impact on the continent,” Thomas-Greenfield said. “As I traveled Africa it was rare that I didn’t meet someone who I had known at the university when I was here or who was here before me, or who came after me, including the president of Liberia who was here at Madison Business College when her husband was studying at this university.”

Thomas-Greenfield is now a distinguished resident fellow in African studies at the Institute for the Study of Diplomacy at Georgetown University. She also is senior counselor at Albright Stonebridge Group, a global strategic advisory and commercial diplomacy firm in Washington, D.C.