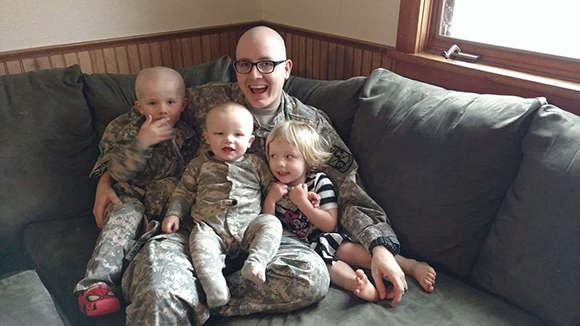 The U.S. Army will have a tough choice to make about William Cocke when he graduates in May 2019.

Cocke joined the Army ROTC Badger Battalion during his second year at UW–Madison, after his interest was piqued in U.S. Army Cyber Command—a component of the Army dedicated exclusively to cyberspace operations security. Once connected with the ROTC program, he also decided to study Urdu through Project Global Officer (GO).

Project GO, which is funded by the Department of Defense, is a collaborative initiative with the Defense Language and National Security Education Office. The program builds the language skills, regional expertise, and intercultural communication skills of ROTC future military officers. Students participate in domestic and overseas language study and cultural immersion for the study of critical languages, such as Hindi, Indonesian, Russian, and Urdu—all of which are offered at UW–Madison.

Cybersecurity and Urdu have more in common than might first appear. Cocke explained that cybersecurity and linguistics often overlap, with language and cultural skills serving to help identify key information. He also noted that Urdu is a critical language as the U.S. continues involvement in countries in South Asia and the Middle East where Urdu is spoken prominently.

Cocke is finishing his second year studying Urdu at UW–Madison, including two summers through Project GO, and has already seen considerable gains from the program. Before joining Project GO, Cocke said he knew only a few words of Urdu. Today, Cocke is approaching working professional fluency, a level that would let him interact with others in a professional environment and have conversations about work, aspects of life, and organization needs.

“Of course we want to see language fluency come out of the program, but a major goal of Project GO is to get officers familiar with other cultures and used to the concept of thinking globally,” Cocke said. “I also think the goal is to have officers who can be aware of sensitivities when interacting with other cultures, while also contributing to conversations respectfully and productively.”

In the meantime, he plans to continue studying Urdu, and also begin learning Pashto, a critical language native to Afghanistan and Pakistan. Pashto will be a fourth language for Cocke, who learned Mandarin in Taiwan during a two-year mission trip.

Cocke, who studies finite group theory—systems that behave like we expect numbers to behave but have different attributes—will graduate and commission in May 2019. Although his specific branch has yet to be decided, he hopes to serve on Active Duty as a Cyber Officer.

Since Project GO began at UW–Madison, more than 100 ROTC students from 47 schools have been awarded Project GO scholarships for language studies. Forty awardees have been from UW–Madison or other Wisconsin higher education institutions. Through programs such as Project GO, UW–Madison is helping to prepare the next generation of military officers, foreign area officers, federal service agents, and other leaders for an increasingly interconnected and global world.

Laura Hammond, executive director, Project GO, said that the program is able to act as a talent pipeline for developing professionals skilled in critical languages such as Urdu.

“The language proficiency Project GO participants like Wil Cocke are able to develop aligns with the Department of Defense’s key priorities of building up our nation’s capabilities by training specialists in critical languages and strengthening the workforce readiness to respond to global needs with area and language specialists,” Hammond said. “In addition, the skills Wil has developed will open his service opportunities and make him a more competent and prepared leader to meet the growing global demands of the 21st century.”

In addition to Project GO, UW–Madison is also home to the Russian Flagship Program, a federally funded program that gives undergraduates of all majors the opportunity to reach a professional level of fluency by graduation. Students enroll in courses on Russian language and culture on campus and study abroad in Russian speaking countries at least twice–the second time on an academic-year overseas capstone program, during which students complete a professional internship.

“Russian Flagship students are able to achieve a professional level of proficiency in Russian virtually unattainable in standard undergraduate programs,” said Karen Evans-Romaine, professor of Russian in the Department of German, Nordic, and Slavic and director of the UW–Madison Russian Flagship Program. “They are gaining professional experience as well. Internships during the academic-year Russian Overseas Flagship Program in Almaty, Kazakhstan, have given students extraordinary opportunities to use their Russian language and cultural skills in settings such as hospitals, laboratories, media outlets, classrooms, businesses, and non-profit organizations.”

The UW–Madison Russian Flagship Program is funded by The Language Flagship, a major component of the National Security Education Program in the U.S. Department of Defense.

Since the Russian Flagship was established at UW–Madison in 2010, 32 students have completed the program with superior-level proficiency and have been certified as Flagship Global Professionals. Currently 48 students are participating in the program.

“The University of Wisconsin–Madison is a natural partner for government agencies such as the Departments Defense, State, Health and Human Services, Energy, and Education,” said Guido Podestá, dean of the International Division at UW–Madison. “Ensuring future leaders are acquiring a global mindset along with cultural and linguistic fluencies is crucial to growing a constructive presence in the world.”

While Project GO and the Russian Flagship Program are molding the next generation of international leaders for the nation, one of the university’s newest projects, the Wisconsin Language Roadmap, is aimed at transforming the state.
The goal of the Wisconsin Language Roadmap, which is funded through a two-year federal grant from the National Security Education Program of the U.S. Department of Defense, with substantial support from the University of Wisconsin–Madison College of Letters & Science and the International Division, is to enhance the economic competitiveness of Wisconsin by strengthening language education for students across the state.

“The Wisconsin State Language Roadmap is an excellent example of efforts to promote effective partnerships between the states and the federal government in addressing the language needs for the entire country,” Nugent said.