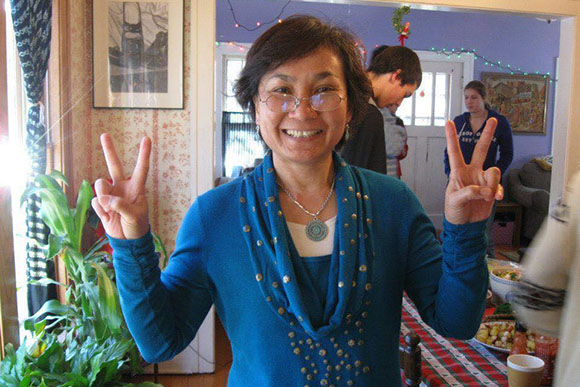 University of Wisconsin-Madison students, faculty, staff, friends, and family mourn the loss of Kannikar Chanprasert Elbow, a dedicated and innovative educator of Thai language and culture. Kannikar was loved by her students and greatly respected by her colleagues, having gained knowledge and experience through a variety of roles throughout her dynamic life.

Kannikar Chanprasert Elbow was associated with UW-Madison for nearly 30 years and in the past 12 years was a senior lecturer in Thai language in the Department of Languages and Cultures of Asia (recently reorganized as Asian Languages and Cultures). In addition, she served as a member of the Steering Committee of the Center for Southeast Asian Studies. At UW-Madison, she was a highly successful and greatly respected teacher, known to her students and colleagues as Ajan Daeng.

Kannikar was born in Khon Kaen, Thailand, and completed her BA degree in 1979 (in English, with a minor in German) at Silpakorn University in Nakorn Pathom. For the next eight years she worked as a teacher of language and cross-cultural training for the US Peace Corps in Thailand, serving as the Program Director during her last two years (1985-1987).

In 1987, she entered the MA degree program in Public Policy and Administration at UW-Madison, where she completed her degree in Spring 1989. In the summer of 1989, she married Kent Elbow, a doctoral student in the Development Studies Program. In 1989-1990, she launched her career as a Thai language teacher at the University of Washington in Seattle.

In 1991, she and her husband began careers that moved them periodically between Africa and the United States. During most of 1991 she was employed by CARE International in Niger, West Africa, where Kent completed his doctoral dissertation research. They returned to the US in the summer of 1992, where Kannikar taught Thai language at the Southeast Asian Studies Summer Institute (SEASSI), which was at the time hosted by the University of Washington. In the 1992-1993 academic year, Kannikar began her long association with UW-Madison’s Department of Languages and Cultures of Asia as the Thai language teacher, handling all three levels of instruction. She continued teaching intensive Thai in Summer 1993 as part of the orientation for UW’s College Year in Thailand program. Following that summer, she and her husband returned to Africa with their first son, Paul–this time they lived in Senegal–where the family resided for the next two years.

In fall 1995, Kannikar returned to UW and launched her close relationship with the Center for Southeast Asian Studies as the program’s Associate Advisor for nearly two years. In this capacity she was at the forefront of a wide range of activities that contributed significantly to the center’s success as one of the leading programs of its kind in the US.

Following the birth of their second son, Santi, in January 1997 Kannikar’s family returned to Senegal, where she served as an administrator for the International School in Dakar until summer 2001. Following a year in Thailand (2001-2002), where the boys attended primary school in Bangkok, in the summer of 2002 Kannikar moved to Guinea, West Africa, where the she and her family lived for two years. During her stay in Guinea, Kannikar organized and supervised the Bilingual School of Labé, a modest, temporary school established for the purpose educating a small number of expatriates, including Paul and Santi, and local children in a setting that otherwise offered few options for those seeking access to high quality primary education.

In May 2004, Kannikar returned to Madison with her younger son, followed by the return from Guinea of her husband and older son a year later. In Madison, Kannikar devoted her summers to teaching Thai at SEASSI, now permanently located at UW-Madison. In fall 2004, her association with UW became permanent; she served brilliantly as senior lecturer in Thai until her passing on November 8, 2016. During her long and dedicated service to the Department of Languages and Cultures of Asia and to the Center for Southeast Asian Studies, Ajan Daeng established a national reputation as an outstanding language teacher and mentor, developing close relationships with hundreds of her students, over fifty of whom completed graduate degrees at UW-Madison. Throughout her life Kannikar was a builder and enthusiastic participant in social, professional, inter-cultural and multi-lingual networks that spanned Asia, Africa, North America, and beyond. She will be greatly missed by everyone who knew and loved her.