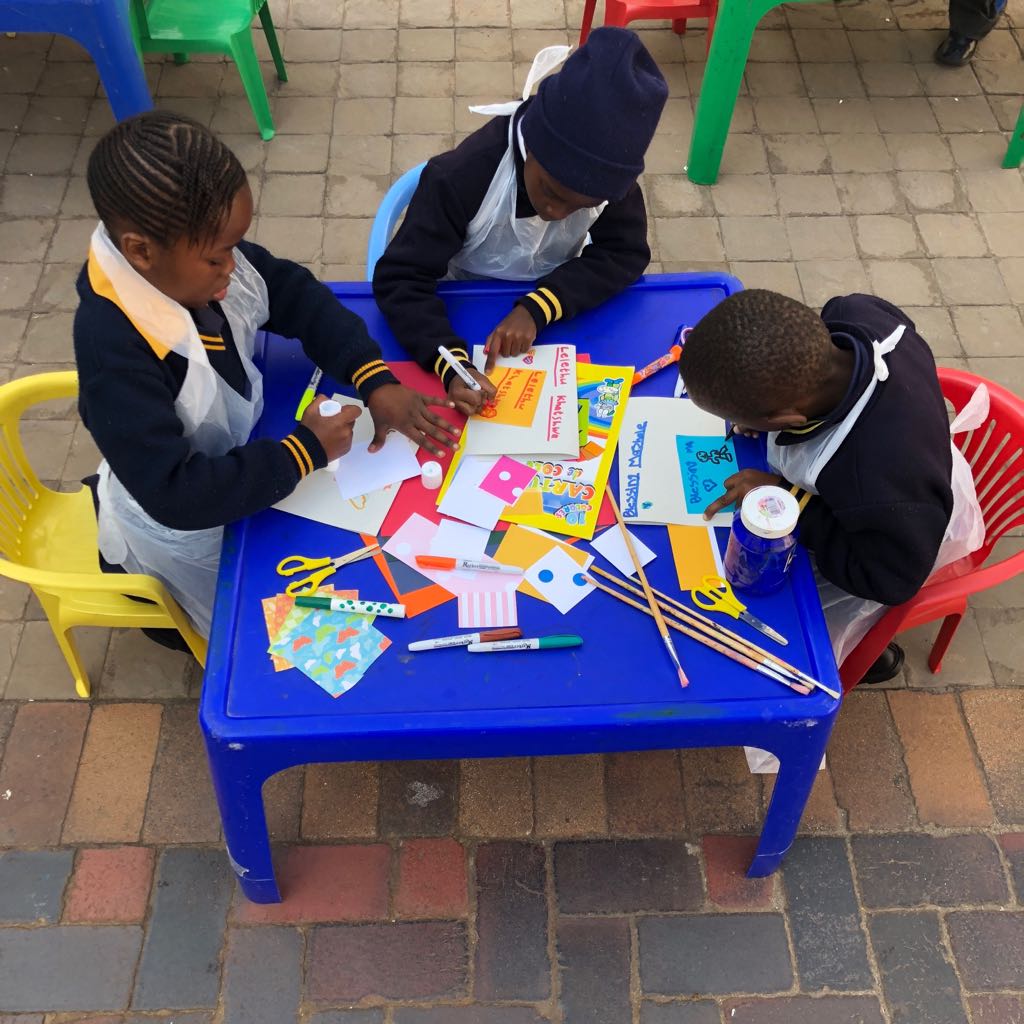 Children in Wisconsin and South Africa now share a special connection thanks to Shiloah Coley, a journalism major who is also pursuing certificates in art and African-American studies.

Students spend spring and fall semesters interning at the Madison Children’s Museum, where they curate exhibits, plan programming, work with children and parents, and provide other assistance to staff. During the summer, students are on-site in Johannesburg at Play Africa—a South African non-profit dedicated to creating safe and inspiring learning spaces for children. As an intern with Play Africa, students learn the inner workings of an NGO, create and execute exhibits, and interact with children and families.

A key element of the experience is developing a project that connects MCM with Play Africa. Coley devised a program that would let kids in Madison and Johannesburg get learn more about one another through art.

“The idea was for kids to make art about their daily lives,” Coley said. “I wanted the art to be true to their own lived experiences. Their work showed where they live, their family, favorite games, or favorite foods, and they also wrote a little about the drawing, including their name and age.”

Coley brought art from MCM, created during the spring, and displayed it at Play Africa. This fall, she is displaying the art from Play Africa at MCM. The program has been a hit with children in both Madison and Johannesburg, who have been enthusiastic to share their lives with peers around the world.

“Most of the kids were super excited about their artwork being seen by other kids on the other side of the world,” Coley said. “I think the children got to see that there are actually more similarities than differences among them, even though they are on two different continents.”

Debut at the Met

The success of Coley’s art project between MCM and Play Africa even opened doors for her at the Metropolitan Museum of Art in New York City. Over the summer, Play Africa received a request from the Met to participate in #MetKids, a program to recreate images from the Met’s archives with a theme of their choosing. Play Africa asked Coley to develop a proposal.

This revelation led Coley to propose an idea where children at Play Africa would reimagine images from the archives, inserting themselves, their friends, families, and their own lives to create a more diverse representation.

The Met and Play Africa embraced the idea. Coley chose 30 images from the archives that children at Play Africa used as inspiration to share their own lives. The reimagined works were displayed alongside the archived originals on October 28 at the Met, where they were viewed by over 200 children and their families.

Coley helped facilitate the exhibit in New York, which also offered viewers the opportunity to recreate the same works with their own lives, continuing the spirit of exchange between children in the U.S. and South Africa.

“It was such a blessing for me to have received this opportunity,” Coley said. “It cemented that I am on the right path in my life. The work I have done through with the Madison Children’s Museum and Play Africa has been the most rewarding experience of my life.”

“This collaboration is the Wisconsin Idea in action: a UW–Madison student intern connecting a Madison community organization to one abroad, allowing the staff and children to learn from each other,” Kern Hall said. “As the first intern, Shiloah truly made something special for both communities and amazed us with the unexpected addition of the project at the Met.”

Coley had already added international dimensions to her UW–Madison experience through participation in the Global Gateway Program—a four-week study abroad program designed to introduce first and second year students from diverse background and fields to international and global issues.

She traveled with a cohort of students to Rio de Janeiro in 2017, where they explored various aspects of life and culture alongside a UW–Madison faculty member. Coley, who plans to attend graduate school and research the impact of art on urban communities of color, was particularly taken by graffiti art and murals used to record and share history with tourists. She tied these interests into a research project completed during the program.

“The way graffiti is normalized and not criminalized is beautiful,” Coley said. “This has, in a sense, created an open landscape for people to express the beauty of the culture and the struggles, particularly the low income people in Brazil. It is such a nuanced way of using art to tell the stories of people who are in poverty or struggling.”

Having had such positive experiences on the world stage, Coley hopes more UW–Madison students will pursue opportunities abroad.

“Having the opportunity to expand interests outside of the U.S. and being able to gain a global perspective challenges how you live and operate in the world,” Coley said. “Even engaging kids in other places can impact on how you approach things.”