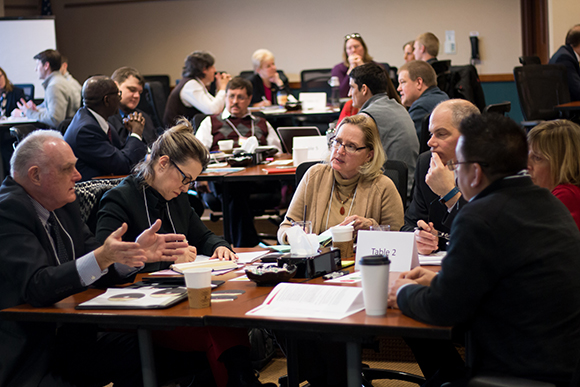 If 10 years ago you had asked Mark Tyler, president of OEM Fabricators, what cultural knowledge and language skills his company would need to expand onto a global market, he probably would have laughed.

“We are located in Woodville, Wisconsin, which had just over 1,000 people,” Tyler said. “At the time I wouldn’t have seen our business expanding beyond Wisconsin, much less around the world.

Today, nearly half of OEM’s customers are multinational corporations conducting business in the U.S. Such a wide customer base for OEM, which provides machining, welding, painting, and fabrication across multiple sectors including oil and gas, construction, and health care has been a significant factor in the company’s expansion. When OEM was founded in 1986 it had just two employees working out of a 2,500 square foot pole shed. Currently, OEM is home to nearly 300 workers based in three facilities producing sales exceeding $50 million.

“Staff at OEM Fabricators are meeting with foreign visitors at least once a month,” Tyler said. “Meetings are always in English, but we are at a disadvantage. During the discussions, the visitors may have a sidebar in their own language. They also do the translation and therefore control the context of the discussion. If we hire translators, often they do not understand the technical concepts or business specialty areas, which also creates challenges.”

Tyler attended the Wisconsin Language Summit at UW–Madison on January 26 to share his perspective as a business leader on the importance of developing a workforce for Wisconsin with deep cultural competencies and multilingual skills. Leaders across business, healthcare, human services, local and state government, education, and a variety of other sectors participated in presentations and roundtable discussions to share ideas, perspectives, and experiences that will become the building blocks for a language roadmap for Wisconsin.

Funding for the Wisconsin Language Roadmap Initiative was provided to the University of Wisconsin–Madison through a two-year federal grant from the National Security Education Program of the U.S. Department of Defense. Letters of support, which were instrumental in obtaining the grant, were provided by Governor Scott Walker and Senator Tammy Baldwin. The summit was co-sponsored by UW-Madison and the Wisconsin Department of Public Instruction, with support from the Wisconsin Economic Development Corporation.

The Wisconsin Language Roadmap Initiative is aimed at enhancing the economic competitiveness of Wisconsin by strengthening language education for students across the state. Wisconsin is the seventh state to embark on this initiative after Hawaii, Ohio, Oregon, Rhode Island, Texas, and Utah.

Utah State Senator Howard Stephenson served as keynote speaker for the summit and presented on outcomes from Utah’s own language roadmap, which was implemented in 2008. Among the measures enacted were a statewide initiative in support of dual-language immersion (DLI) programs, which according to Stephenson, was not only the most effective in producing students proficient in the language, but also most cost-effective at $100 per student per year.

“We need to do everything we can to encourage what is successful in language acquisition,” Stephenson said. “I’ve found there is nothing more successful than dual language immersion.”

The DLI programs, which are currently in 195 Utah schools and begin in kindergarten or first grade, provide instruction in two languages, with one teacher teaching only in English, and one teaching only in a partner language. The 50/50 model has been yielding strong results, according to Stephenson, with students acquiring proficiency in languages such as Spanish, Chinese, French, and Portuguese.

An additional element of Utah’s plan to enhance language and cultural competency includes the Bridge Program, which seeks to “bridge” the gap between high school and higher education. The program aims for students to take the AP language and culture exam by the end of 9th grade. A partnership between schools offering DLI programs and Utah state higher education institutions allows students to enter college only a few credits short of obtaining a minor in their target language.

Stephenson noted many additional benefits from the DLI and Bridge Programs, including improved performance and academic achievement, higher scores on standardized tests, greater ease in problem solving, and stronger bonds in ethnically and religiously diverse communities.

Though the summit has concluded, continuing partnerships with individuals, leaders, businesses, and organizations across Wisconsin will be crucial to successfully disseminating and implementing top-tier recommendations.

University of Wisconsin–Madison Chancellor Rebecca Blank noted that the commitment of partners statewide will be necessary to change the landscape of language education in Wisconsin. She also advocated for exploring new approaches to language and cultural education to meet the future needs of Wisconsinites.

“As we design the future of language education in this state, we need to be willing to experiment with new approaches,” Blank said. “This state is in the midst of change, and we need to find ways to lead that change rather than be buffeted by it.”